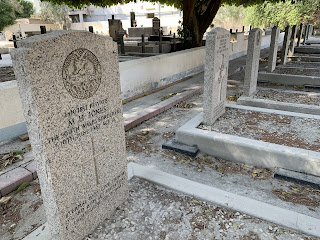 I don't know Private Jones.  All I know about him was that he served with the South Wales Borderers, and died at the young age of 18 on 10th June, 1967.
I think his ID number inscribed on his tombstone might give more information about him but all I do know is that he was buried in the Salmabad Christian Cemetery along with other colleagues of his.
I have no idea how he died - did he fall sick and medical attention came a little too late? Did he die in service since he was with the British Army and got involved  in some conflict where he paid the highest price?
I  wouldn't have spotted his grave if I had not decided to look around the cemetery when we went there on the first anniversary of my father's passing on November 29. Sometimes when you walk around a cemetery, you learn something new and make discoveries that make you think and pause.
I wondered if he was homesick when he died - or how long did his parents mourn his passing? Did he have any siblings - and did they miss having this brother around them? He would have been 71 today and probably with children and grandchildren of his own, and if not, he would possibly be the kind of uncle who had lot of war stories to share.
Is there anyone who still remembers him - or even cares that he is buried somewhere in the Arabian Gulf and far, far from his homeland. 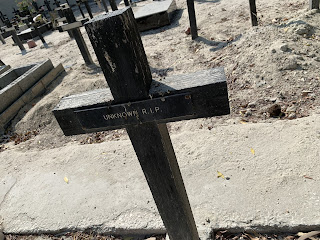 At least, his grave has a name unlike another that was marked Unknown RIP. You can't go more impersonal than that - and I wonder, who is buried there and what stories and life experiences have been extinguished because no one knows who, what and when about this particular grave.
Again, is there someone waiting for this person to return not knowing that the person is no longer alive?Was it someone engaged to be married and did his fiancee think he ran away with someone else leaving her heartbroken? Or was he someone who made plans to do something wild and adventurous with his friends, and they figured he chickened out?
For all you know the person buried might have been a complete jerk, and many might be relieved that they haven't seen or heard from him for a long, long time.
We would never know. We can only speculate but we will never know.
For some reason this Christmas I thought of these two people and wondered about them and many others who are buried - and possibly forgotten and as a result erased from memory.
Who would think of them unless they really mattered and their absence felt in a more tangible sense?
Christmas is a time when we enjoy being with loved ones - and also a time when we make it a point to remember those not with us whose presence at one time brought much joy to our lives. I think of my parents who lived long enough for us to cherish having them around, and who gave us memories that we still hold dear to our hearts.
They are remembered and missed... however, it also made me think of ourselves who are still in the land of the living.
What are we doing today that will leave a lasting legacy for tomorrow? It doesn't have to be a cure for cancer or solution to ending world hunger, but could be something small and insignificant but one that would bring a smile on someone's face. If not a smile, at least, a sense of relief or satisfaction of having done something that was honourable.
Jesus dis say, be like a salt, and we need to ask, are we salty enough or are we mere chalk dust?