As the crow flies... 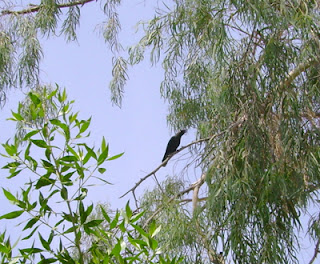 This story could read like a fable, but it is not. It is simply dressed like one, and might even give the impression of one of those quaint moral tales with deep underlying meaning, but it is nothing like that. It is simply an account of a bizarre experience in our garden, which may or may not have moral implications but we could take a chance.

On Tuesday, a baby crow fell off a tree in our garden... maybe, that’s not the right way to begin this story, and so let me try again... once upon a time, a baby crow fell off a tree and landed on the soft blades of grass that covered the Gordes’ garden in Juffair. Upon hearing the soft thud on the lawn, Tequila, my dear little mongrel, ran towards the little bird and began to bark as loudly as she possibly she could. She was clearly surprised to see a life-form fall from the sky, and called my brother to check it out.

If the story had ended here, I suppose, some convenient moral could have been drawn... two creatures interacting with each other, a dog calling out to a human to assist a dying bird, a human intervention that saved the day... sadly, the story took a different turn.

As soon as my brother knelt to take a closer look at the bird, two crows suddenly swooped down at him and tried to attack him. Taken by surprise, my brother looked up at the crows, and they came back and attacked him again. Meanwhile, my dog had already scurried inside and my brother followed soon after... it was pointless standing there and watching the re-enactment of Alfred Hitchcock’s The Birds in one’s very own garden.

The next day, the day after and since then, the crows have been relentless in their attack. As soon as any member of our family steps out of the house, they fly down and perch themselves on a lower branch, call out to each other with their loud crowing and then fly close to our heads and flap their wings on our hair.

Two days ago, they followed my father all the way to the cold store, and only stopped when the neighbour’s dogs started barking. And yesterday, as I went for my evening walk, the birds followed me by jumping from one pole to the other, and that freaked me out, but thankfully, they didn’t follow me all the way.

I was told that this is quite normal. Apparently, crows do get very protective about their babies (what are baby crows called anyway?), and do not tolerate anyone coming close to the nests. And if a baby crow dies in a fall, then, they start pecking and clawing at anyone who might be standing close by or even jogging, as this poor soul in London discovered to his horror. This site gives detailed information about all that crows are capable of doing, and provides some assurance that what we are going through is not unique but a normal pattern of behaviour as far as crows are concerned.

It may be normal for crows, but it is definitely uncomfortable for us. It is, after all, our house. A place where we stay, eat, drink, sleep, entertain and relax. A place that we call 'home', and yet we are being cornered by these birds who are not even registered residents of this compound. Obviously, I'm exaggerating but that's because I want to twist this account into a fable, a morality tale or even - shudder shudder - a political statement.

Without going into detail, I suppose, there are many parallels to be drawn into the politics of victimhood that's so popular amongst some quarters, occupation, aggression and retaliation. The crows might be thinking that we are, in some ways, responsible for their little one's death and might be seeking revenge (I know this sounds crazy but it sounds good for the fable bit), and so, flying close to our heads, following us, and freaking us out could be the only weapons at their disposal.

As far as 'we' are concerned, it is apparent that our superior biology hasn't helped matters much, and when we finally decide to do something about it, then, it will involve solutions that are drastic. And yes, if this goes on for a few more days, then, we'll have to come up with some final solution, however, ominous and loaded that sounds.

But all said and done, every day when I step outside the door and stare at the crows, it is not politics or sociology or ecosystem that comes to my mind... I get this miserable feeling that I am part of a Seinfeld episode.

bint battuta said…
'what are baby crows called anyway?'
i think it's probably something boring like fledgling - but i like 'crowlet', or 'crow-ling'... please be careful, all of you!
7:19 pm

Anonymous said…
Crows really do that? Well perhaps their message was Don't interfere!! in life or death.things will take their course
3:51 pm

Anonymous said…
Oh that was anonymously me - Manju
3:57 pm

Ashish Gorde said…
Bint Battuta: Fledglings, ofcourse, but I like crowlets, crowlings or... how about crowley? :) Oh yes, we are being very careful while stepping out of the house... very spooky.

And pray tell me, Manju, why are you so anonymous? Oh yes, crows really DO that... never knew till we've been experiencing it first hand. Horrid.
6:01 pm

John Wallen said…
For me there is an existential lesson here. We might think we rule the roost, but the crows will still be in your garden long after the paper on which your housing contract was written has become yellow with age.

John Wallen said…
My point is that people have the impression that they control the environment but crows will be in these trees long after the people who live in the compound have gone. Quite possibly the genus "crow" will survive on the planet (as a species) longer than humanity itself.
5:50 pm

Unknown said…
My problem is not with 'crows' in general, but only with THESE two crows. I'm sure crows as a genus will survive but I hope these two will 'disappear' as soon as possible. :)
5:59 pm

Ammoontie said…
Hi ashish,
Are the crows being territorial or just terrorising? Better be careful the next time you are in the garden.
10:53 am

Anonymous said…
I'd say try the higher road.. leave some morsels of food for your new followers. They may take it as an appeasement offering and leave you alone, or bring reinforcements... for the feast anyway! You could then film the sequel to Birds and make a fortune and move house perhaps.. :D but do blog on about how it turns out.
6:55 pm

Joel Indrupati said…
This comment has been removed by the author.
12:14 pm

Joel Indrupati said…
That's a bit scary. I wish you a happy dealing with unhappy crows. Btw, I had read Daphne du Maurier's 'The Birds' much before I saw Hitchcock's movie. And found the reading chilling too. Chilling, not in the modern day (2000-2007) slang sense!!
12:19 pm

Natasha said…
How crow-adly of them!! Terrorising decent people, for a crow-ling whose soul, would have transformed into another being by now. But then, each one to themselves!

I have noticed another characteristic about Crows. They extremely protective of their territory and do not allow most birds to encroach their zone. And they can resort to various bullying tactics to drive them out. If you observe, an area with a huge population of crows has barely any other species of birds.

Anyways, that apart, tell me are the Crow-ards behaving now?
And I do hope they didn't push you to being lethal and malacious.
7:10 pm