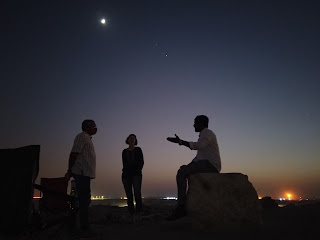 I don't imagine any of us expected to celebrate Christmas in the shadow of the 'new normal.'

Everything seems so unreal that we could just be living in a dystopian nightmare, and not 'real life' as we thought 2020 was going to be just a year earlier.

Our hopes for an extraordinarily happy new year has been replaced with precautionary measures for basic survival. It's as if the most important thing to do is to avoid getting infected rather than seeing how we score on our resolutions.

Now even the idea of a New Years resolution seems rather naive and pointless because even though some of us had long given up on the idea of resolutions, nevertheless, we still felt the idea wasn't bad at all.

This year, however, all that changed. Somehow cynicism sounded like common sense and pointlessness seemed like a wiser option.

It is hard to believe that only a year ago, the things that we are asked to avoid were considered normal and acceptable. It is hard to fathom that a shift took place in just a matter of weeks and has now stretched for months on end.

Now I'm not one of those who think that COVID-19 is part of some huge conspiracy and that we are all conned into accepting these changes. I do believe the science is pretty clear about the dangers of this virus, and the sensible thing to do is to listen to experts rather than agreeing with fear mongers.

What I do like to say though is that we can make a choice in recognising that the 'new normal' is just a temporary phenomenon, and that it is just a matter of time when we would be able to return to life as it once was... hopefully one where the lessons learnt about being healthy and safe are part of our lifestyle.

At least, that's what we can hope for though I have my doubts. I feel that once the vaccine does what it's supposed to do, we are most likely going to forget everything we've learnt this year and go back to living recklessly as we once did.

But then again, there's no harm hoping for the best, and expecting a better outcome come what may. We learnt this year that circumstances can change quickly - and so unexpectedly - that our world can change into something altogether unrecognisable.

What it means is that the temptation to give up on hope might seem strong but the desire to keep hope burning should remain incandescent as well.

So though we may not know how the next 12 months are going to be, let's hope for the best and trust God that we emerge unscathed by the pervasive negativity.