And what the highway told me... 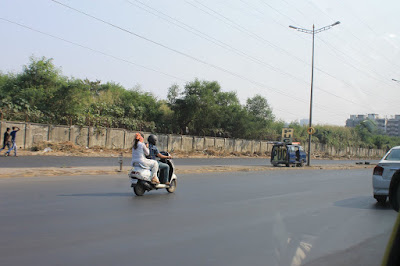 I was in Bombay recently and needed to go somewhere that involved a two-hour taxi ride (one way, that is) to my destination.

I could either just sit and stare out of the window and take some random shots of this-and-that as I usually do or I could indulge in some small talk with the taxi driver, and also, take some pictures.

The second option seemed more interesting since it'd give me a peek into how people in the taxi driver's demographic view India.

Currently, there has been a lot of talk  about intolerance and imposition of certain 'values' into the body politic and I was curious to know how taxi drivers like Mishra thought of these changes.

Of course, one had to be careful while approaching such a subject. One can't possibly come right out and ask a total stranger if he thought Modi was subverting the secular and tolerant nature of India.

So I asked him about his life, how long he has been in the city, what his dreams are, where's home... questions that could be turned into 'small talk' if things get a bit heated but also could be used to assess the larger picture and get an understanding of the person's worldview.

There have been reports of 'chauvinists' who dislike people from Mishra the taxi drivers's ethnic group from settling in Bombsy and making a living. They feel that Bombay must be a city for Marathi language speakers and others should stay out if necessary. Some taxi drivers were also beaten up and some students arriving into the city were also attacked.

Mishra, on the other hand, remarked that he had been in the city for the past 20-25 years and regards it as home. His children did their schooling here and that he raised his family in the city that he now regards as his real home.

As an expat who has lived in Bahrain my entire life I can totally understand these sentiments and it's probably because of my own background that I have never felt compelled to agree with views of political parities such as Shiv Sena or MNS - even though they seem to champion the cause of my own 'ethnic group.'

Bombay has always been a city built by immigrants from other states and I suppose it's stories of ordinary people like Mishra who have provided the engine for the city's growth.

Later he told me that he was the only poorly educated person in his family.  Both his father and grandfather were professors in the big university and were scholars in their field. His siblings were also in prominent positions after acquirig degrees.

And then through his earnings as a taxi driver, he made sure that both his children received proper education. Hence his daughter is now an MA in English Literature and working as a lecturer in some college. She's also married to a man who finished his MBA and is now working for a multinational.

His younger son is currently studying at Cambridge, which I later understood to be a school offering an ICSE syllabus as opposed to the local state board syllabus.

The local state board schools are a lot cheaper and sadly aren't very strong in their content. And so for a person like Mishra, sending his son to an ICSE school must have been quite a sacrifice but one that he didn't seem to mind.

Educated people are the ones who are better able to see things clearly and offer solutions to improve things, he said.

And then I asked him if getting a degree is all that's required to be as 'educated' as per this definition.

Not at all, he exclaimed and asked me to look outside.

He pointed out to so many people on motorbikes without any helmets or any protective gear.

Look at them, he said, they are all breaking the rules without even realizing they are endangering their own lives through this reckless behavior.

The government or any political party, he added, doesn't benefit by this rule. If people wear helmets it only serves to protects them from possible danger to their own life.

I turned and saw that there were so many people on the busy highway without any helmets. And this was no ordinary highway, it had lot of fast cars and trucks hurtling across and the danger was a real possibility.

There were couples and even families riding without helmets. I even saw a woman wearing a long sari and her husband wearing a 'lungi' and I thought  - suppose the sari or the 'lungi' gets caught in the wheel?

Mishra also noticed the same couple and said, If these people don't even care about their own life... how do you expect them to care about the country?

His words tore into my thoughts as I was looking at the couple who were not just inappropriately dressed but also without helmets.

Mishra continued and this time was more passionate... look at all these people, he said, they must all be properly educated and so they know the difference between what is good and bad, what is safe and what is risky, and yet they choose to ignore what is so obvious. If educated people behave like this... what do you expect the illiterate people to do? What example are they setting?

And look at them again. They must be people with enough money so it's not like they can't afford to buy helmets but somehow they don't feel the need. It's as if they feel that spending money on something that protects their life is not really worth it.

How can you expect such people to think about the country, its future and to see themselves as contributors to its growth and development?

Profound words, indeed... and for me, in particular, these thoughts answered the big question I had about India's trajectory under the current dispensation.

It really doesn't matter if the current Modi government is promoting inept and unqualified persons to head educational and cultural bodies... as long as there are ordinary people like Mishra out there who are passionate about the idea of real education and ambitious about it... there's nothing to worry about. Absolutely nothing. And that's something to be happy about.