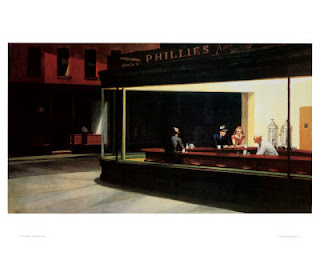 I can't find the article on the web, and so I can't post the hyperlink here. It is a very inspiring article on 'The Spectacles of American Isolation' written by Mark Feeney and was reprinted in the Gulf News' Weekend Review. It's not included in the Review's web edition, and I guess, it could be partly because it's a syndicated article from the New York Times News Service.

The main focus of the article is an examination of Edward Hopper's paintings, and how he could be considered to be the Great American Artist. Fenney writes, 'the sources of his popular appeal are obvious enough: immediate accessibility; a subtle yet vivid colour sense; familiar, but not too familiar, subject matter; a fondness for picturesque settings such as New York, Maine and Cape Cod; even a whiff of prurience.'

However, he goes on to describe what he feels to be a "Hoppersque" quality, and calls it loneliness.

"That loneliness is both what is most and least American about Hopper. It is least so because loneliness is not exactly a selling word. In a society that proclaims all men are created equal, the individual's apartness indicts society. "America is a vast conspiracy to make you happy," John Updike once wrote. Loneliness foils the conspiracy.

"Of course, a nation that prides itself on rugged individualism has to keep a place of honour for solitude... what Hopper reflects is something quite different, the unheroic loneliness of everyday people, people like you and me: ushers, secretaries and apartment dwellers. The Hemingway hero, another paragon of American individualism, is in control of his apartness. Hopper's people are not. It is imposed on them by the circumstances of life. Their plight reminds us that individualism without ruggedness simply means being alone -- alone even when, as in Hopper's Room in New York someone else is there."

It would be easy to dismiss Fenney's observation and Hopper's paintings of lonely people as a purely American phenomenon, and Fenney does make his point rather persuasively especially when he states that "always, he locates his people in space (an unmistakably American space)... His friend, the artist Guy Pene du Bois, described Hopper's New York as "a noiseless architectural world." Rather than teem and roar, his city seems on the verge of evacuation."

From a purely Asian or even Middle-eastern perspective, such descriptions would lend credence to the more popular indictments we have about the west as a place that lacks familial relationships, and where individuals are left to fend for themselves without parental or any other support. Isolation as a cultural motif and not an exception to the general rule of social decorum.

However, Fenney's article made me wonder if this loneliness that he talks about -- so evident in Hopper's paintings -- is it purely an American (or western) phenomenon or is it global in anyway. Or to be precise, does it touch a familiar chord to those of us here?

It would be almost blasphemous to suggest that loneliness is a familiar pattern in our societies because we've been trained to acknowledge the supportive presence of family, tribe and community. Togetherness is, what we believe, to be the natural state of people in our communities, and individuals, if there be any, exist only in relation to someone else. Individuals cannot exist on their own, and if they do, then, there is something decidedly wrong with them. Wrong as in, morally wrong.

But the fact of the matter is, lonely people do exist in our societies, and their loneliness is made even more acute because no one expects them to be. Perhaps parallel could be drawn between Hopper's portraits because just like the supposed incongruity of those images neither does anyone expects painful isolation to be part of our social landscape.

I am not familiar with any artist from South Asia or Middle East who has managed to capture the loneliness that some people experience in our societies. I suppose, if examples are to be drawn, then, perhaps, Amitabh Bachchan's 'angry young man' could be one such character -- a loner whose isolation is a result of flaws in a supposedly paternalistic social structure, and who vents against a system that is supposed to protect but, instead, shuns the likes of him. It would be an interesting study to see why such a persona has achieved immense popularity throughout Asia, and why it has spawned countless poor imitations. Is it because we like to see him as an exception and comfort ourselves into thinking that such characters exist only in fiction? Is it because we find an emotional connection with the character because he expresses the frustrations that we find hard to verbalise? I am just guessing.

I wonder to what degree has present day consumerist culture and information technology has played a role in shaping a lonely landscape. Consumerism empowers individuals with the ability to acquire 'things', and these 'things', in turn, feed an assumption that one's self worth requires gadgets and goods for its justification. It is often a lonely road as the individual struggles to acquire these 'things', and I wonder, if this quest isolates him from his neighbour and friends.

Technology, too, has made social interaction redundant for those who choose not to meet any human beings. Instead of going to restaurants one can order a takeaway. Instead of going to the cinema with friends, one can watch films on a plasma screen enveloped by 5.1 surround sound. Instead of meeting people in clubs or at their homes, a webcam and an instant messenger or a Facebook account can take care of one's social life.

These are extreme examples, but these are not beyond the realm of the possible. And our Asian and Middle-eastern lives have been impacted by these forces. And one has to only take a walk in our streets to observe the social debris of these phenomena. I am tempted to give examples but I'll resist the urge to do so. Perhaps I'll save it for another post. It's not that I dont want to give examples, but I believe there are so many and it'd be hard to select the best of the lot.

But what puzzles me most is, what is so enchanting about loneliness that poets, artists, photographers, film-makers and writers have managed to create an impressive body of work on the subject? Why does painful isolation of certain individuals become so inspirational that it has steered discussions on the social condition of the human race?

But I'm sure there is more to it than meets the eye, and underneath all this philosophical jugglery lies a simple desire to make sense of a crazy world that does not operate the way we expect it to. Maybe it is this exception to the general rule of how we want our world to be that makes us aware of anomalies, and makes us equally determined to state that they are anomalies.

Maybe, but then, again, one never knows. It'd be best to find out, but question is, where do we begin, and how?

Dr. Ally Critter said…
Loneliness could be the result of reality becoming more fashionable and people becoming more willing to e as they are and show themselves as they be. Perhaps it always existed in every society, is only coming to light now.

But seriously are our societies really all that different, aren't we all the same?
11:00 pm

Ashish Gorde said…
That's exactly what I'm saying... loneliness is very much there in our societies as well, but does that mean, are we all the same? That's a real biggie there, and I'm somewhat wary of making statements like those. Suppose I say, there are similarities in our dissimilarities?
11:54 pm

Similarities in our dissimlarities.
I buy that for sure!
3:15 pm

John Wallen said…
A very well researched and presented look at "the outsider" in art and in life. To some extent we are all "outsiders" whenever we refuse to be bullied into following the majority view about something. "Conform or be ostracized" is often the choice that faces us.
3:52 pm

Unknown said…
Your good knowledge and kindness in playing with all the pieces were
very useful. I don’t know what I would have done if I had not
encountered such a step like this.