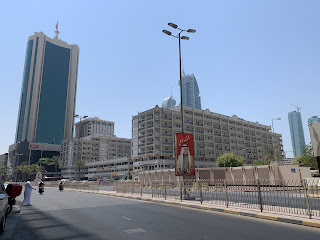 It was 1975. Or, I think, it was. Memory can, sometimes, play tricks with things like dates and such. But yes, it was a long time ago and I was very young. Maybe not too young to have sketchy memory but not too old either to manage vivid recollections of what happened.

But one thing I do remember is that I didn't like the idea of waking up early in the morning and going for the flag hoisting ceremonies. Yes, ceremonies. We had to go to the Indian Embassy first, and then follow it up with another ceremony at the Indian Association premises. And these had to take place in the morning before the grown-ups had to go to their respective offices.

If it was any other month, perhaps, I wouldn't have complained so much. But it was the middle of August, and the peak of summer in Bahrain. Extreme heat and high humidity together conspire to make life not just unbearable but yucky as well. So it was with great reluctance I followed my dad and my brothers to both flag hoisting ceremonies.

The Embassy event followed a standard routine - the Ambassador read the President's speech, hoisted the flag, everyone sang the National Anthem, some of the school kids sang a patriotic song, and then, the grown ups greeted each other, and went their respective ways.

The Indian Association event was a little low key. Only the committee members were present for the flag hoisting and the singing of the National Anthem, and that's all was done, nothing else. The main event was, always, in the evening -- a variety show followed by a Bollywood movie at Awal Cinema, specially ordered for the occasion. Everyone looked forward to it, and for much of the 70's, the Indian Independence and Republic days were celebrated with the same formula. It must be said that this was way before videos became a big thing and so watching a new film in the cinema was both important and special.

On that particular morning, however, I saw something that forever changed the way I understood concepts like patriotism and nationalism. But I have to, first, explain the Indian Association's then location because it will enable you to understand my story a little better.

The Indian Association is now defunct and its original premises on Government Avenue have long been demolished to make way for the swanky Bank of Bahrain and Kuwait building. But it stood directly opposite the Secretariat and was diagonally opposite the Manama Centre, which can be easily described as one of the earliest modern looking buildings in Bahrain.

The Manama Centre was still under construction that morning when the 'something' took place, and from the terrace of the Indian Association we could easily see the construction labourers hard at work. My father, as the president of the Indian Association, hoisted the flag and soon all those gathered stood in attention and sang the National Anthem. And then, as we were singing the Anthem we noticed it.

Two of the construction labourers immediately stopped what they were doing, and stood in attention when they saw us singing the National Anthem. They were atop the Manama Centre's unfinished terrace, but it was their spontaneous gesture that caught everyone's attention. It was a moving sight, and one that has often humbled me whenever I considered concepts like patriotism. Those two men just stood up out of respect for their nation, to them the flag represented all their hopes and aspirations, and perhaps, memories of better days.

And, maybe, in their pathetic existence, that moment was the only time when they could raise their heads and be proud of something that was bigger than themselves and their little world.

Pragya said…
This was a wonderful read Ashish. Some patriotism always sneaks into our expatriate lives on these days. The other day I got goos pimples listening to an old Hindi song - must have been from a post-Independence film - Hum laye hain toofan se kishti nikaal ke, is desh ko rakhna mere bachchon samhaal... don't ask me why! And right after that the song from Pyaasa followed on the iPod which made me think sadly about the things that still haven't changed after Guru Dutt lamented them so long ago - Jinhein naaz hai Hind pe woh kahan hain..

Ashish Gorde said…
That's so true, and yet we are, often, accused of being unpatriotic... ironic, uh.
9:40 am

Anna said…
Very nice one. Indians abroad always hanker for their country. Those construction labourers are some of the most marginalised and oppressed of the Indian community abroad. My parents thought India was the greatest country ever. They couldn't imagine becoming citizens of another country. And they were young people during the Independence movement.
3:16 pm